If you are a United States citizen who is working abroad, you might be confused about how you will be taxed. In this instance, the rules for filing taxes and paying estimated taxes are the same regardless of whether you are abroad or in the United States. Regardless of where you live, as a U.S. citizen, your worldwide income is subjected to income taxes in the U.S.

As a U.S. citizen that lives out of the country and works abroad, you are automatically allowed a two-month extension from the regular due date for filing taxes. This extension is permitted even if you don’t request it. As an example, for a regular calendar year return, your due date would be June 15 with the automatic two-month extension. Regardless, you must pay any taxes that you owe by April 15, or interest will start accruing.

You will pay taxes wherever you are working and living in the world, just the same as you would while in the U.S. If you are self-employed and you are working abroad, you will be subjected to paying self-employment taxes. If you are an employee, you will be paying taxes as usual. You are taxed at the same rates as you would be while living in the U.S. So, to break it down, you will pay taxes on your foreign income at the same marginal rate that you would be taxed for income that you earned while living and working stateside.

As an American living and/or working abroad, you must file a tax return if your total income – regardless of where the income was earned and in which currency you were paid – exceeds any of the established thresholds:

Even if you have earned all your income in a foreign country and haven’t lived in the U.S. at all during the last year, you are still required to file a tax return. You may be required to file a state tax return as well, which depends on the state you lived before you moved overseas.

There is an issue that could arise where an individual could be double-taxed on their income because they might be required to file a tax return in the U.S. and in the country where they live. To help prevent this situation, the 2017 Foreign Earned Income Exclusion (FEIE) allows individuals to exclude $102,100 of income that they have earned abroad from their tax obligation to the U.S.

The Foreign Tax Credit also helps mitigate double taxation. Using this approach, Americans who earn income overseas might be able to reduce their tax obligations in the U.S. even more – beyond FEIE limits – if they accrued or paid tax to the foreign government. This is a complicated provision that applies to certain kinds of income with unique consideration related to each of the different countries.

In addition to earned income, you will need to report other items on your U.S. tax return while you live abroad. The IRS will require you to reveal any assets or foreign accounts that exceed a set threshold. If you are a U.S. citizen who works abroad, you can get the help you need from the MKS&H tax experts. One of our tax experts will meet with you at your convenience to discuss the best procedure for filing a tax return as a U.S. citizen who works overseas. 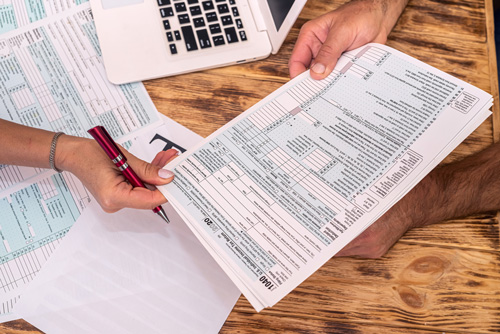